In 1866, an Italian botanist named Odoardo Beccari was scouring through the jungles of Malaysia when he unearthed something truly alien-like: a plant, to be sure, but a plant with no leaves, no chlorophyll, and which did not perform photosynthesis and appeared to live underground. It looked more like a fungus or, perhaps more astutely, an insect or arachnid.

Beccari documented the discovery, filing away his illustrations and notes on the new species. And then, nothing. This weird, subterranean plant was never seen or heard from again.

That is, until just last year. Biologists from the Crop Research Institution in the Czech Republic happened to be exploring the exact same region of rainforest that Beccari had trudged through 151 years prior, when they spotted a bizarre flower poking through the leaf litter. They didn’t know it right away, but they had just rediscovered Beccari’s otherworldly plant. The picture above represents the first time the species has ever been photographed.

Three leading Dutch organizations have been collaborating with the aim of making tulip breeding and production faster and more sustainable. Using the latest technologies, it is now possible to identify the DNA sequence of the common garden tulip genome (Tulipa gesneriana), one of the biggest genomes ever sequenced. Its size is estimated to be nearly 11 times larger than that of humans.

The tulip genome reveals how the DNA determines the characteristics of a tulip. DNA patterns that are linked to desirable characteristics will soon be used in advanced breeding so that these characteristics can be combined to give new, improved varieties. With this knowledge, new tulip varieties that are resistant to common diseases can be developed faster and in a more targeted way. This will also reduce the use of plant protection products.

Hans van den Heuvel, Director Research & Development at Dümmen Orange, says: “The tulip genome makes the human genome look tiny: the entire human genome fits into one tulip chromosome. With the technology that was available at the turn of the century, this job would have taken over 100 years—an impossible task. But now we can do it in a matter of days. Data analysis is in full swing and there is no doubt that it will produce information that will transform tulip breeding, making it faster, more predictive, and above all ‘greener’ because we will focus on varieties that can be grown sustainably.”

Passengers flying into, or out of, the Lansing airport in the dark might notice a pink glow coming from the south side of the Michigan State University campus. The high pressure sodium (HPS) lights in the teaching greenhouses have been mostly replaced with LED lighting modules.

Why pink, and not bright white? It’s all about the usable light spectrum that plants need. Plants actually do best with the red and blue light, which appears pink when mixed. Plants reflect green light waves, which is why plants are green. MSU has purchased green-lensed glasses to counter the effects of the pinkish light on eyes. With the green “sunglasses,” things appear normal under the new lights. Reportedly, the electricity usage will be reduced by up to 50% compared to the old fixtures. The old fixtures also cast quite a large shadow over the plants during the day. The new LED’s are very narrow and barely noticeable above the benches.

Dr. Kristin Getter and Dr. Roberto Lopez were instrumental in pursuing this new technology
for the teaching greenhouses. In the two houses that Dr. Lopez will be using for his class, the HPS lights were kept in half of each house so he will be able to demonstrate the effects of light type on plant growth to his students.

So, the next time you’re flying over campus, just note that the pink glow is the newest in
lighting technology and impress your fellow passengers. 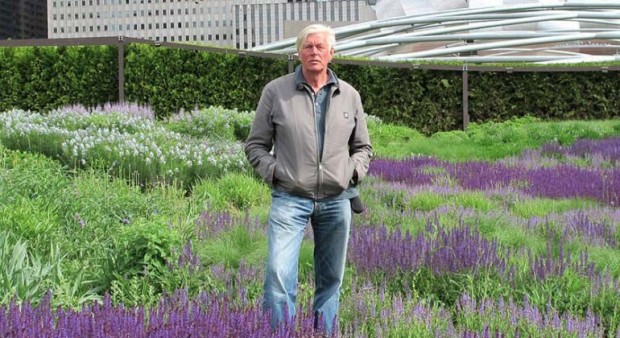 On Thursday, January 4, 7:00 p.m., the Garden Club of Michigan and Friends of Detroit Film Theatre co-host a special screening of “FIVE SEASONS: The Gardens of Piet Oudolf,” a new documentary about the internationally renowned Dutch garden designer and plantsman Piet Oudolf.

Oudolf’s projects include The High Line (New York) and the Lurie Garden in Millennium Park (Chicago), as well as many others throughout the world. At the invitation of the Garden Club of Michigan, Oudolf has committed to design a garden in Detroit on Belle Isle. Piet Oudolf and filmmaker Thomas Piper will be present at the screening to discuss the Belle Isle garden proposal with audience members.

The Michigan Department of Natural Resources and the Garden Club of Michigan will host two public meetings November 14 and November 28 to gather public input on a proposed garden in Detroit’s Belle Isle Park. The garden will be designed by internationally renowned garden designer Piet Oudolf.

Oudolf’s acclaimed gardens include the Lurie Garden in Chicago and the Highline in New York City, among scores of gardens around the world. He is one of today’s premier garden designers for public landscapes and is a leading figure of the “New Perennial” movement that is characterized by utilizing herbaceous perennials and grasses. His garden designs are artistic, ecologically inspired, accessible, welcoming, and enjoyed year-round.

After touring Detroit with the Garden Club of Michigan this past spring, Oudolf selected Belle Isle Park as the proposed site for one of his acclaimed garden designs. The site, located near the Nancy Brown Peace Carillon Tower between the Remick Band Shell and the Anna Scripps Whitcomb Conservatory, will be a connector in the cultural heart of the park. It also will help revitalize the island and attract garden lovers from near and far. The proposed garden will be paid for through donations and fundraising that will cover all the design, installation and maintenance costs.

Oudolf described the proposed Belle Isle site as a connector for people and activities on the island and “an opportunity to reinvigorate the adjacent structures and facilities.”

At the open houses, participants will view a short video of Oudolf discussing his vision for the garden and providing insight into the preferred site location. He also will respond to a few questions submitted by the public ahead of time. Both open houses will take place at the Flynn Pavilion (4435 Muse Road, Belle Isle Park, Detroit).

“It is vital that the community has an opportunity to weigh in on the proposal,” said Scott Pratt, chief of Southern Field Operations for the DNR. “It is equally important that the DNR and the garden club ensure that the garden will be financially sustainable and has the support of state and city agencies.”

Why be concerned?
“This annual grass is considered highly invasive, taking hold in areas of disturbed soil along banks, roadways and woods,” said Greg Norwood, invasive species coordinator for the DNR’s Wildlife Division. “Seeds can be transported by water or on animals, and seeds can remain viable in the soil for 3 to 5 years. Because deer don’t feed on Japanese stiltgrass, it often takes over in areas where deer browse on native plants and leave open patches of soil.”

The Oak Wilt Coalition is a new partnership between private, nonprofit and governmental organizations to help increase awareness about the serious threat of oak wilt disease in Michigan. Oak wilt is a fungal disease that is spreading among trees in Michigan and many other states. It has been confirmed in much of the Lower Peninsula and in the western portion of the Upper Peninsula, as shown in this 2016 oak wilt map.

This disease is lethal to many oak species, including red oaks, pin oaks and black oaks. It can be transmitted by insects moving to fresh wounds on trees, including those caused by pruning. The fungus also can spread through root systems, causing death of nearby oak trees. “Oak wilt initially causes wilting of leaves, ultimately killing otherwise healthy trees within a matter of weeks,” said DNR forest health specialist Roger Mech. “The effects can be dramatic and costly when mature trees die and are removed, especially in highly maintained landscapes, parks and recreation areas.” Mech said that prevention and management are possible with disease awareness, proper identification and timely response.

To find out more, visit: www.michiganoakwilt.org

On Aug. 21, a 70-mile-wide ribbon from Oregon to South Carolina called the “path of totality” will experience a total solar eclipse. Large swaths of farmland in the Great Plains and Midwest will be plunged into darkness for 2 1/2 minutes, and temperatures will drop about 10 degrees in the middle of the day.

But as millions of people look up at the sky, many Midwest scientists will turn their eyes and cameras toward the plants and animals on the ground. And they’re not sure what will happen.

Speck says different parts of the Earth experience a total eclipse about once a year, and that makes tracking changes in animal and plant behavior challenging. 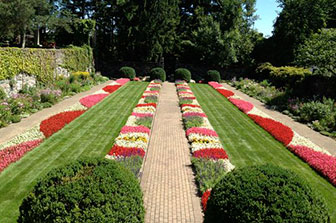 For the third year, admission is free to Cranbrook Gardens through October 31, 2017, courtesy of its sponsors. The gardens are open daily from 9:00 am to 5:00 pm for self-guided visits.

The Sunken Garden, a formal garden surrounded by fieldstone walls, was originally established by the Booths as a vegetable garden. They used the crop to feed the people living and working on their estate a century ago. The Booths lowered the garden to extend the growing season. In later years, the Booths moved the vegetable garden to another location and transformed the original space into a flower garden. Today, Cranbrook House & Gardens Auxiliary’s captivating layouts for the Sunken Garden attract thousands of visitors each year.

Since there is no cost to enter the grounds, guests are encouraged to visit the Sunken Garden and all the gardens often to discover firsthand how they evolve from spring through fall. Although the gardens are free, tours of Cranbrook House and special events require paid admission, and donations are always welcome. All proceeds help support the preservation of Cranbrook House & Gardens, a National Historic Landmark. For more info, click here.