Anyone who has travelled across multiple time zones and suffered jet lag will understand just how powerful our biological clocks are. In fact, every cell in the human body has its own molecular clock, which is capable of generating a daily rise and fall in the number of many proteins the body produces over a 24-hour cycle. The brain contains a master clock that keeps the rest of the body in sync, using light signals from the eyes to keep in time with environment.

Plants have similar circadian rhythms that help them tell the time of day, preparing plants for photosynthesis prior to dawn, turning on heat-protection mechanisms before the hottest part of the day, and producing nectar when pollinators are most likely to visit. And just like in humans, every cell in the plant appears to have its own clock.

But unlike humans, plants don’t have a brain to keep their clocks synchronised. So how do plants coordinate their cellular rhythms? Our new research shows that all the cells in the plant coordinate partly through something called local self-organisation. This is effectively the plant cells communicating their timing with neighbouring cells, in a similar way to how schools of fish and flocks of birds coordinate their movements by interacting with their neighbours.

The Michigan Big Tree Hunt Contest, sponsored by ReLeaf Michigan, closes on September 3, 2019. All Michiganders are encouraged to find a Michigan big tree and enter it into the contest. Grab a friend or family member and hunt for the big trees that surround us every day in parks, on nature trails, or in our own backyards.

When the contest closes, certificates and prizes will be awarded for the largest tree submitted from each Michigan county, the largest tree found by a youth hunter (15 and younger) and adult hunter (16 and older), the largest eastern white pine found, and for potential state champion trees.

To enter your big tree or to learn more, visit www.bigtreehunt.com.

Yale graduate student Nathan Havill was studying Asian hemlocks to learn why they can resist the hemlock wooly adelgid (HWA) while the Eastern hemlock (Tsuga canadensis) cannot. In the process, he studied some hemlocks growing at the Arnold Arboretum in Massachusetts, which were presumably southern Japanese hemlocks.

He discovered that the DNA of those hemlocks did not match that of any known species. An investigation showed that the Arnold Arboretum acquired the seeds in 1983 and that they came from Ulleungdo, a small island off the South Korean coast.

In 2008, Arnold biologist Peter Del Tredici traveled to Ulleungdo himself to gather more specimens, which he gave to Garth Homan, a botanist at the University of Maine. Homan found that some of the tree’s DNA was much like the southern Japanese hemlock, while other parts of the DNA more closely resembled that of a different Japanese species. Plus, the Ulleungdo tree had different needles and cones, and flushed new leaves several weeks earlier than the others.

After analyzing these and many other differences, the team announced a new hemlock species: Tsuga ulleungensis, the first new temperate conifer since 2002.

Scientists and others who hope to restore the devastated American hemlock forest are excited. However, since the tree is both rare and endangered, it will likely be a long process for all involved. Breeding work could produce trees that are mostly native but also adelgid resistant.

Excerpted from The Coniferite, Newsletter of the American Conifer Society Central Region.

Created in 1915 by Cranbrook founder George Booth and his father, Henry Wood Booth, Cranbrook’s Japanese garden is among the oldest in North America. Although the garden today remains a place of inspiration and renewal for visitors, the space itself needs rejuvenation. With the support of the Consulate General of Japan in Detroit, the Cranbrook Center for Collections and Research has received a grant from the Japanese Ministry of Land, Infrastructure, Transport and Tourism (MLIT) that will start the necessary work.

“There are six gardens worldwide that received one of these grants in 2018,” said Gregory Wittkopp, Director of the Cranbrook Center for Collections and Research. “We are very fortunate to be one of these six gardens.”

The MLIT grant provided funding to bring six gardeners to Cranbrook from the Japan Federation of Landscape Contractors. Over the course of six days, the gardeners helped transform one corner—the lily pond cascade—into what will once again be a place of beauty and contemplation. This work is the first of a six-phase master plan for the entire garden that is being designed by Sadafumi Uchiyama, garden curator of the famed Portland Japanese garden in Oregon.

Wittkopp said that Cranbrook “wants to respect the history and legacy of the garden, while also taking the opportunity to enhance it. Our goal is to make sure that this becomes a garden that is actively used for a variety of reasons, and that people find meaning here.”

It started with the desert lilies in December. Since then a wave of wildflower blooms has been crescendoing across Southern California’s Anza-Borrego desert in a burst of color so vivid it can be seen from mountain tops thousands of feet above.

Two years after steady rains followed by warm temperatures caused seeds dormant for decades under the desert floor to burst open and produce a spectacular display dubbed the “super bloom,” another winter soaking this year is expected to create possibly an even better show by Mother Nature.

Having two super blooms in two years is highly unusual. In California, super blooms happen about once in a decade in a given area, and they have been occurring less frequently with the drought.

Red the rest of the story…

Boxwood blight, a serious fungal disease that attacks boxwoods, has been detected for the first time in Michigan. The disease was found in Oakland County in three separate locations: a landscape firm, a homeowner’s yard, and holiday wreaths for sale at a retail store. The Michigan Department of Agriculture and Rural Development (MDARD) was also notified by the Wisconsin Department of Agriculture, Trade and Consumer Protection that infected boxwood may have been sold at other retail locations in Michigan.

“Boxwood blight is a devastating disease that has caused significant losses to homeowners and the nursery industry in states that already have the disease,” said Gina Alessandri, director of MDARD’s Pesticide and Plant Pest Management Division.

Boxwood blight produces dark brown leaf spots and causes rapid defoliation that sometimes kills young boxwoods. Boxwood blight first appeared in the 1990s in the United Kingdom and is now widely distributed in Europe. In the United States, the disease was first found in 2011 in Connecticut, North Carolina and Virginia, and has since spread to more than 24 states. Boxwood blight affects all species of boxwood. However, some species and cultivars are more susceptible than others. American boxwood and English boxwood are highly susceptible. This disease also affects the related shrub sweetbox, as well as pachysandra, a well-known groundcover. Boxwood and pachysandra are commonly used in commercial and residential plantings throughout Michigan.

Wreaths displayed outdoors are a potential concern if they are exposed to the elements. The biggest risk comes when people dispose of the infected wreaths after the holidays. MDARD recommends that anyone who has a wreath containing boxwood plant parts should consider it infected and dispose of it by burning or, even better, double-bagging and including it with their trash for deposit in a landfill.

Alessandri advised that anyone who suspects that they have plants infected with boxwood blight should contact their local MSU Extension office.

David Austin, the rosarian and founder of David Austin Roses Ltd., died in December, 2018 at age 92. Over the past 20 years, U.S. and Canadian gardeners came to know Austin as the creator of beautiful, fragrant English roses.

He bred more than 200 English roses during his extraordinary career. From a farming background, Austin developed a keen interest in old roses in his early twenties. He felt that although the old roses were charming and often had magnificent fragrances, they were lacking in the color diversity and repeat blooming common to the more modern hybrid teas. This belief was the basis for the collection of English roses that gardeners enjoy today. He set about creating an entirely new rose, which combined the beauty and fragrance of old roses with the benefits of modern roses. His first English rose was ‘Constance Spry,’ launched in 1961. Notable varieties include ‘Gertrude Jekyll’—twice voted England’s favorite rose—and more recently, ‘Olivia Rose Austin.’

David Austin Jr., son and Managing Director of the company for the last 25 years said, “My father was a remarkable man. His love for the art of rose breeding was truly inspiring; he loved nothing more than seeing the pleasure that his roses gave to others.
His presence will be sorely missed within the global family company that he created. But the passion he instilled will continue and we will hold true to my father’s vision when he founded the company almost 50 years ago.”

Dan Buettner has studied five places around the world where residents are famed for their longevity: Okinawa in Japan, Nicoya in Costa Rica, Icaria in Greece, and Loma Linda in California and Sardinia in Italy.

People living in these so-called “blue zones” have certain factors in common – social support networks, daily exercise habits and a plant-based diet, for starters. But they share another unexpected commonality. In each community, people are gardening well into old age – their 80s, 90s and beyond.
Could nurturing your green thumb help you live to 100?

It is well-known that an outdoor lifestyle with moderate physical activity is linked to longer life, and gardening is an easy way to accomplish both. “If you garden, you’re getting some low-intensity physical activity most days, and you tend to work routinely,” says Buettner.

He says there is evidence that gardeners live longer and are less stressed. A variety of studies confirm this, pointing to both the physical and mental health benefits of gardening. 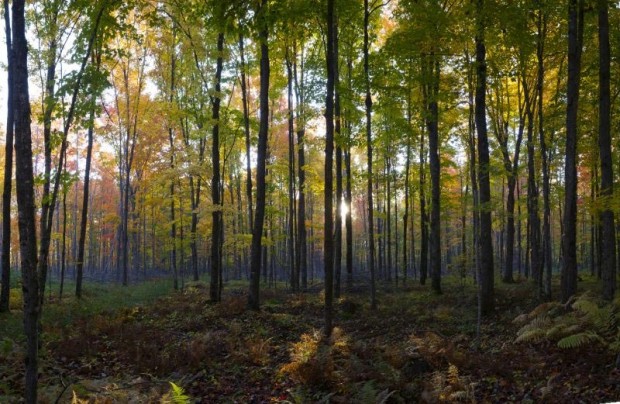 Whether you’re out in the woods or wandering through city streetscapes, keep your eyes open—you may spot one of Michigan’s largest trees!

Started by ReLeaf Michigan in 1993, the Big Tree Hunt takes place every two years and helps catalog the state’s biggest trees. Your assignment: Seek out the most majestic trees in your area and report them, because tree-spotters can earn certificates and prizes. “This is a really fun reason to get out and enjoy nature,” said Melinda Jones, executive director of ReLeaf Michigan. “It also helps raise awareness and enjoyment of the trees in our landscape.”

The Big Tree Hunt is one way to discover candidates for the National Register of Big Trees, which so far includes 19 Michigan trees. The biggest tree spotted on the last hunt is a sycamore in Lenawee County with a 315-inch girth.

ReLeaf Michigan is a nonprofit group that encourages planting trees. Entries, either online or hard copy, will be accepted until September 3, 2019. Find out how to participate by visiting www.bigtreehunt.com or calling 800-642-7353.

During the 2018 Michigan Herb Associates (MHA) spring conference in Lansing, herb enthusiasts from throughout the state celebrated and learned about herbs. Through a silent auction and herbal plant sale, conference attendees raised $3,000 for Michigan 4-H Children’s Gardens. The Michigan State University Department of Horticulture graciously contributed the plants for the auction and sale.

Since its founding in 1987, MHA has donated more than $121,000 to the state’s 4-H Foundation in support of three specialty areas at Michigan 4-H Children’s Gardens: the Peter Rabbit Herb Garden, Garden of Delight, and Herbal Tea Garden. The gardens are located at Michigan State University in East Lansing.

“We are in a renaissance for edible gardening, and the increased attendance at MHA annual conferences echoes the rising interest in learning how to grow and use herbs,” said Jeanne Hawkins, MHA president. “Fresh herbs make everything else in the garden taste better, plus they are pretty and smell wonderful.”