Archive for the Michigan tag

Experts used to say the number of ash trees lost in Michigan was tens of millions.

Now they say hundreds of millions, according to Deb McCullough, a professor in Michigan State University’s entomology and forestry departments. Still, there’s hope for the ash’s survival.

“In a nutshell, what I found is that [ash] seems to be holding on quite well,” said Dan Kashian, who studies ash tree regeneration.

The mortality varies among species, but now the devastation has become an international epidemic, McCullough said. While some patches are worse than others, it’s hard to find a lot of live ash trees in Lower Michigan and much of the eastern and central Upper Peninsula.

The culprit is the emerald ash borer, Agrilus planipennis Fairmaire, an exotic Asian beetle discovered in southeastern Michigan near Detroit in the summer of 2002. Adult beetles are metallic green and about 1/2-inch long. They hitched rides on ship and plane cargo originating from Asia and movint to Detroit.

Read the rest of the article here…

Get outside and train your eyes onto the forest floor. Morel season is on in Michigan.

“People are already finding the black ones around Jackson,” said Chris Wright, executive director of the Midwest American Mycological Information.

That name roughly translates to “people who love growing and foraging for mushrooms.” The Farmington Hills-based nonprofit organization leads classes in safe mushroom foraging, which are required for people who want to sell mushrooms they’ve collected.

“There a big mystique about morels,” Wright said. “They only come up once a year, and it’s fun to trample through the woods and try to find them.”

Thanks to an alert citizen working in the area, the Michigan Department of Agriculture and Rural Development (MDARD) today confirmed hemlock woolly adelgid (HWA), an invasive tree-killing pest discovered in Ottawa County in June, has now been found at locations in southwestern Muskegon County. The finds in Ottawa and Muskegon counties are the first instances of HWA occurring in native forest hemlock.

MDARD and its partners have been actively monitoring and controlling HWA since 2001, but until this year, all HWA infestations found in Michigan were restricted to nurseries and hemlock landscaping. Each infestation was treated, eradication activity took place, and continued surveillance occurred after eradication activities were wrapped up.

“Once again, citizen involvement played a central role in early detection. Continued citizen involvement and citizen reporting is crucial for the management of this pest or any other exotic pest,” said Gina Alessandri, MDARD’s Pesticide and Plant Pest Management Division Director. “Examine your hemlock for HWA, and if you find something suspicious, contact MDARD immediately.”

Hemlock trees are typically green in color, but in advanced HWA infestations, twig and branch mortality can occur, giving infested trees a grayish hue. The small cottony masses characteristic of HWA are found on the underside of the branch at the base of the needle; they are never found on the needles themselves.
HWA can be very difficult to detect at low population levels because the insect is so small.

Since its discovery in Virginia in 1951, HWA has spread rapidly across most of the native range of hemlock in the eastern U.S., decimating hemlock forests from Georgia to Maine. To protect Michigan’s hemlock forests and the wildlife they support, MDARD has maintained a strict quarantine against out-of-state hemlock since 2002. Current and past infestations in Michigan are likely the result of hemlock from these areas shipped into Michigan prior to, or in violation of, this quarantine.

The Calhoun County Public Health Department has found the dangerous giant hogweed plant in the county and is asking residents to be cautious.

According to a Monday news release from health officials, the plant was found in Pennfield Township. The plant was completely removed and the site will be monitored by township and county officials for several years.

Hogweed is dangerous because the sap on the leaves, roots, flower heads, seeds and stem hairs can cause blistering and scars if they touch bare skin. Sap can also cause permanent blindness if it gets in the eyes.

Read the rest of the article (with video)… 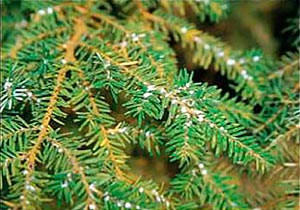 According to the Michigan Department of Agriculture and Rural Development, Hemlock Woolly Adelgid (HWA) has been eradicated from three counties across the state: two sites in Macomb County, two sites in Ottawa County, and multiple locations within Emmet County. HWA was first detected in Emmet County in 2006, then at the Macomb and Ottawa county sites in 2010.

The infestations were believed to have originated from hemlock nursery stock originating from HWA-infested areas of the U.S. The infested trees at each site were removed and destroyed. Nearby trees were treated with pesticides and surveyed annually over the course of at least three years.

HWA is a small, aphid-like insect that uses its long, siphoning mouthparts to extract sap from hemlock trees. Native to eastern Asia, HWA was discovered in Virginia in 1951, and has since spread over an area from Georgia to Maine, decimating hemlock stands.

Over 100 million hemlock trees are present in Michigan forests, providing valuable habitat for a diversity of animals, including birds, deer, and fish. These trees are critical to the ecology and aesthetics of Michigan’s northern forests. Michigan law restricts the movement of hemlock into the state, and includes a complete ban on the movement of hemlock from infested areas.

Tree owners are asked to examine their hemlocks for the presence of white, cottony masses on the underside of branches where the needles attach. If you suspect HWA, contact MDARD immediately: email MDA-Info@michigan.gov or call 800-292-3939.

For more information on the HWA quarantine or other exotic pests, go to www.michigan.gov/exoticpests.

Fresh pruning wounds of oak trees attract beetles that spread oak wilt. It is critical to not prune oaks from April 15-July 15 in Michigan.

Oak wilt is an aggressive disease that affects many species of oak (Quercus spp.). It is one of the most serious tree diseases in the eastern United States, killing thousands of oaks each year in forests, woodlots and home landscapes. Oaks in the red oak group, distinguished by oak leaves with pointy lobes (Photo 1), are much more susceptible to the disease than white oaks, distinguished by oak leaves with rounded lobes. However, all oaks can be affected.

2015 marks the 50th anniversary of Windmill Island Gardens, a city-owned park in the heart of Holland, Michigan. To celebrate the anniversary, horticulture staff will implement a theme of “The Gilded Garden,” intended to evoke a sense of luxury, opulence and visual treasure.

After the tulips are done blooming, annuals will be planted in their place. The gardening staff has chosen flower cultivars in as many shades of yellow and gold as possible to evoke the rich hues of summer. Vibrant masses of golden-toned blooms, stunning color, arresting foliage, and carefully chosen plant combinations will adorn each flower bed. Over 100 varieties of annuals are included in the garden plan; over 20 are new cultivars that have never been grown on the island before.

Whether visitors are seeking a tranquil corner, a shady bench with a view of the windmill, or a velvet expanse of green lawn, the gardens at Windmill Island can provide a feast for the eyes and the soul. For nearly 50 years, the centerpiece of the gardens has been the 252-year-old DeZwaan Windmill. It symbolizes the authentic Dutch heritage of the community. For more information, click here.

Representative Tim Kelly (R-Saginaw Twp) has introduced House Bill 4012 to allow people who live in residential neighborhoods in Michigan cities the right to have a backyard farm from which they could sell farm products.

Amending the “Michigan zoning enabling act” would restore the right that many urban folks thought they enjoyed under Michigan’s Right to Farm Act. Recent regulatory changes have removed the legal protection for people who thought they had an inherent right to raise food for themselves and their families and sell any excess for extra money.

Brenda Dziedzic caught the bug, or butterfly, early on.

She has fond memories of the fields near where she grew up in Waterford Township teeming with butterflies at a time in her life when she didn’t know a black swallowtail from a pearl crescent.

“They always just seemed so beautiful and peaceful,” said Dziedzic, 62, who now operates a butterfly habitat in Westland. “When you see them, it just brings a smile to your face.”

Smiles have been in shorter supply recently as the population of monarch butterflies, one of the most popular species in the United States, has been in a steep decline in Michigan and across the country. It’s a pattern experts believe was caused by a combination of factors and put the future of Danaus plexippus in question.