Archive for the Plant Patrol department

Understanding and controlling these damaging insects 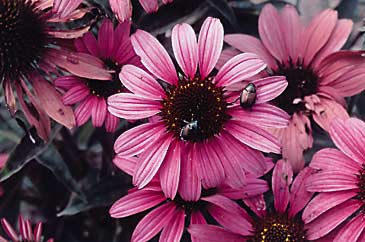 Ah, summer! A time when gardeners can relax and enjoy the fruits of their labor and the beauty of what they’ve created. But wait, what’s that insidious cluster on the rose blossoms? Why do leaves of the linden tree have a tattered appearance? Oh no, it’s Japanese beetles. Why, those creatures must have stomachs made of tempered steel—they’re devouring the poison ivy! And thus begins the beetle battle. Our goal: defeat the enemy. But to defeat the enemy, we must know the enemy.

Adult Japanese beetles are easy to identify. They’re about 3/8 inch long, metallic-green in color, and emerge from the ground in late June. They feed in groups, starting at the tops of plants, then work their way downward. Individually, Japanese beetles don’t consume much. But collectively, their damage can be devastating—and heart-breaking. Japanese beetles feed on over 300 varieties of plants ranging from sweet corn to birch. They are especially fond of plants that grow rapidly in direct sunlight. Their larvae live in the soil and wreak havoc when they feed on the roots of irrigated turfgrass.

Where the little buggers came from

Japanese beetles were first reported in the Northeast United States in 1916, probably arriving in the soil of imported nursery stock. They have been steadily moving outward at a rate of approximately 50 miles a year. They are now found in all areas east of the Mississippi River. Oregon and California are especially concerned with these pests and have rigorous controls on the acceptance of out-of-state nursery stock. Unfortunately, it’s probably only a matter of time until Japanese beetles infest all portions of the country.

The damage that Japanese beetles cause is especially bad at the outer reaches of their territory. That’s because few natural controls exist in newly colonized areas. These pests spend the first ten months of their lives in the soil as grubs, starting in August or September. The following June, adults emerge and congregate on plants where they begin their feeding and breeding frenzy. Adults tend to be highly active on warm, clear days, then return to the soil in the evening. Adults will also stay hunkered down in the soil if the weather turns cold and wet.

Every three or four days for several weeks, adult females will lay one to four eggs, and up to 40 to 60 during their lifetime. 45 days after their emergence, adult beetles say sayonara and begin to die off while, simultaneously, the next generation is beginning to hatch.

Moisture from a late-summer rainfall or irrigation is all that’s needed for eggs and newly hatched grubs to survive. The grubs grow quickly, feeding on grass roots. However, if conditions become too dry, they are capable within a few weeks of moving deeply into the soil for moisture and other roots on which to feed. In autumn, grub-infested turf will appear as large dead patches—the kind of thing that causes severe hair loss and blown capillaries in golf course managers.

When the soil temperature falls below 60 degrees, grubs burrow into the soil and remain there in an inactive state throughout winter (or perhaps read articles like this and plot counter-strategies). In spring, the grubs move toward the surface as soil temperature increases, and resume feeding on grass roots for a brief period. They pupate in an earthen cell and remain there until they emerge as adults.

Many different birds eat Japanese beetles; however, they prefer to dine on the grubs. And in their effort to search for grubs, they tend to tear up small pieces of turf. Okay, a small problem. A larger problem is the lawn damage created by moles and skunks who also feed on the grubs.

Predaceous insects such as the praying mantis occasionally feed on adult beetles and grubs, as do a few native wasps and flies. However, the role they play in controlling Japanese beetles is relatively minor. Several parasitic wasps, flies and plant-friendly beetles have been imported in an attempt to control the beetles, but have seen only limited success.

Japanese beetles are not considered a major pest in, of all places, their native Japan and Korea. This is because several natural controls are present. These include (1) an intestinal parasite called a gregarine, which attacks the grubs, (2) a nematode, or microscopic worm, which eats the grubs, and (3) a bacterial disease called milky spore, which infects and kills the grubs.

These controls were introduced in the Northeast United States several years ago and have kept the beetles in check. As a result, researchers at Michigan State University are assessing the success of these controls and are working to establish them in Michigan’s eco-system on a large-scale basis. Unfortunately for homeowners, these controls are not very effective on a small-scale since adult beetles can easily fly into and out of treated areas. Also, these natural controls are effective only on grubs, not adult beetles.

It’s difficult to control adult beetles with chemical sprays. Plus, these products also kill beneficial insects such as honeybees. Rose fertilizers with systemic insecticides have no effect since individual beetles don’t actually eat much.

Products that contain neem oil are safer and are believed to repel Japanese beetles. However, they, like other chemical sprays, must be applied every few days.

Turf damage from grubs can be prevented with a late July application of Merit (imadichloprid). However, most homeowners can prevent turf damage simply by keeping their lawns adequately irrigated and fertilized. Keep in mind that treatment of your grass for grubs will not appreciably reduce feeding damage from adult beetles, unless your neighbors are treating their lawns too.

To prevent grubs from damaging the turf grass at our rose nursery and large display garden, my husband and I simply irrigate and fertilize the grass.

As for adult Japanese beetles, homeowners can benefit from the same technique we use to minimize damage: remove them by hand. That’s not as tedious and time-consuming as it might sound. We have thousands of rose bushes, yet spend less than an hour a day on beetle removal. My husband, the main beetle-control officer (and shall hereafter be known as “Beetle Bailey”), walks through the nursery on sunny afternoons and shakes beetles from each bush into a bucket of soapy water, or plucks them one by one and tosses them in. The beetles don’t die immediately, but the soap coats their wings so they can’t fly. Eventually they drown, and we dispose of them the next day in our trash.

We tried to control Japanese beetles with Sevin, but found we had to spray every few days. Plus, we weren’t comfortable using an insecticide that harms beneficial insects. Beetle Bailey reports that daily hand removal actually takes less time because there is no suiting up, mixing chemicals, application, equipment clean-up or showering afterward.

We found that Japanese beetles are especially fond of fragrant, light-colored roses. If pressed for time, Beetle Bailey only scouts the area of the nursery where our most fragrant roses, the rugosas, reside. He has even cut blossoms off white and yellow rugosas to avoid attracting beetles. Daily removal is better than waiting to do it every few days, since individual beetles are attracted to large groups feeding on blossoms. If you prevent groups from forming, you minimize damage.

We also use professional-grade traps from Tanglefoot on the outer perimeter of our property. Since these traps work by attracting beetles, they may be impractical for small gardens (the beetles may bypass the trap and head for your garden). However, in larger areas consisting of several acres, multiple traps placed in sunny areas can be used to keep beetles away from desirable plants. With professional-grade traps, beetles are collected in a screw-on canister. This canister must be emptied daily, otherwise the beetles die and create an odor that wards off other beetles and prevents the traps from doing their job.

So, when it comes to controlling Japanese beetles, you actually have several options, each offering varying degrees of effectiveness. You can wait for natural enemies to establish themselves, or you can take a more aggressive approach with chemical control or natural control. We prefer practical control at our nursery because it’s probably the safest, simplest and most effective method of all. And no, I’m sorry to report that Beetle Bailey is not for hire.