Archive for the tolerance tag

Rather than placing plants where they only “tolerate” a space, plant them where they are actually happy

Why do we deliberately plant species that only “tolerate” our gardens? Perhaps it’s because “shade tolerance,” “heat tolerant,” “tolerant of a wide range of conditions” and similar phrases are basic to horticulture. It’s so common in books that we skip right over this important word as we read.

Maybe we just don’t recognize body language in plants as well as we do in people. A plant’s message may reach us on a subconscious level and trigger vague disquiet, but for most it doesn’t process beyond that point.

Are you in tune, or are you living in a garden full of sullen, sniveling, grumbling malcontents? Here’s a primer, a listing of some of the signals I’ve learned to read as “I’d rather not be here but if you insist I’ll stay and make us both miserable.”

A key to recognizing tolerance is knowing what a plant could look like. Until you see a member of a species being all it can be, you may not register your flora’s resentment of the conditions you force it to endure. You may never hear the mumbled curses shared between pallid plants who view you as the stingy human who’s consigned them to, in this first case, chronic light deficiency.

Perhaps the plant that opens your eyes is one of your own that escaped by seed or runner into a brighter place, to stun you with its transformation. Although I’ve also seen this happen where the gardener does not even recognize the original and its progeny as the same species. Maybe your enlightenment comes when you see a division of your plant in better circumstances, strutting its stuff in someone else’s sun garden. The differences, minor or major, and the chance for comparison might escape you except the resident gardener is there, thanking you for the gift of (name of plant here) and bragging on its performance.

What a shade-tolerant plant does is become thin, developing more stem and fewer leaves. The stalks may be weak so the plant dips and sags. Its yearning for sun may make it lean or even crawl toward the light on prostrate stems. The foliage lacks substance and is paler than it should be. In the case of variegated foliage that longs for the sun, golds may become dull green, maroons a muddy pink, and gray loses its silvering fuzz to reveal ordinary green.

Flowers, too, are paler. Worse, they’re fewer in number despite all you spend on “bloom builder” fertilizers.

Some shade tolerant species whose discontent becomes obvious in midsummer:

Daylilies – come on, count the flowers per stem and then try to tell yourself it’s happy compared to sun-grown siblings!

Purple coneflower – snip a flower from your shade-grown echinacea and put it in a vase with one cut from the sun garden.

Balloon flower – this sturdy creature shouldn’t require staking but it will fall when it’s starving for light.

Sullen in the Sun

Their foliage wilts on hot days and has a hang-dog droop even when it’s only pleasantly warm—these plants are begging you for a place with at least midday shade. A leaf’s edges may be scorched, while the blade is pale and chlorotic, its color-producing chemicals destroyed by light as surely as sun fades a drapery. Singed, washed out foliage may be concentrated at the top of the plant or on its sunniest side, that outer rank of leaves taking the brunt of the abuse. Flowers may be abundant but short-lived. The whole plant may opt for a shorter season, in the case of woodland and forest-edge species able to escape into dormancy.

Hostas are troopers, making only the smallest unhappy noises in the sun. Not so, flowering dogwoods and rodgersias, who moan and wail for cool shadow. Lucky bleeding heart and mayapple can fold their foliage early and depart the scene by midsummer.

Whining in the Wind

Holding shredded, tattered flower petals or snapped flower stalks out for you to see, your “wind tolerant” plants can’t believe you fail to notice their plight. Some are less stoic, simply refusing to flower or, if woody, holding back growth on their exposed faces until the windward side is all stunted, twiggy limbs. Other shrubs and trees thrust dead branches in your face, hoping you’ll understand that constant rocking in the wind is costing them roots.

A more subtle sign is foliage that’s been rattled and rubbed against itself until it’s bruised, creased, abraded and wide open to every leaf spot fungus that ever took a liking to that kind of plant.

Serviceberry is wind tolerant, but don’t ask it to endure too much if you expect to enjoy its fragrance or cut a pristine flowering stem for a vase. Poplars stand up to any gale but try not to look at their spotted leaves and cankered twigs, and don’t hold it against them when those twigs grow into easily broken limbs. Great Plains gardeners know lilacs as dependable windbreaks, but don’t send a photo of your symmetrical shrub to your gardening cousin in Kansas, if you want him to remain deaf to his deformed lilac’s moans. And certainly don’t cut a bunch of big, rich-colored blooms from your shrub and drive them out to him, unless you want him to learn to cry over his plant’s paltry showing.

Hostile in the Heat

Plants that don’t love heat, only tolerate it, cry out in singed spots, especially on wide, horizontally oriented leaves. They wilt on the worst days and even on the best days curl their foliage under like so many clenched fists. With every stab from their ever-present mites, they hurl silent curses at the gardener. If all else fails, the herbaceous ones will develop crown rot, tender young buds drying and dying as they emerge, and the plant will bow out.

Many people ask their plants to tolerate heat without knowing it. Away at the office, you may not notice the midday sun or superheated 3 p.m. air that oppresses your Hydrangea, pounds your Pulmonaria, and cooks your Caladium.

Brief bloom, slow growth, increased susceptibility to fungus and sucking insects, tip dieback—these are all the price we ask a plant to pay when it must tolerate drought.

Just because it puts up with the shade, don’t ask it to take the drought, too, or Astilbe will simply retract its developing flower buds in crisped disappointment. Spirea is a dogged player, even where it’s dry—just don’t expect it to put on any but the briefest floral show. Misunderstood Monarda, grown dry for fear of wetting its mildew-prone leaves, will powder up even sooner than otherwise. Given constant moisture the same plant may show not a spot of gray. 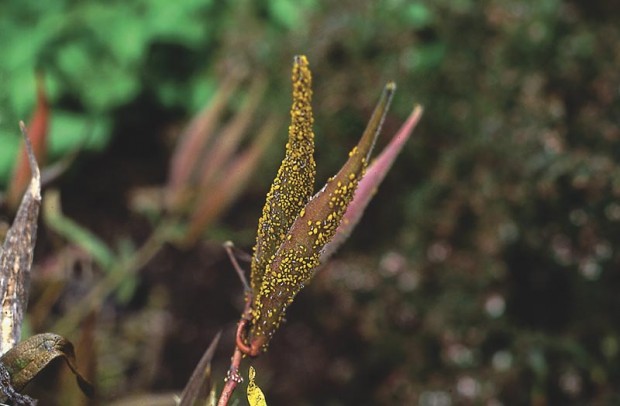 Muttering in the Mud

Listen early in the year for the voices of plants who want out of the wet soil. They give themselves pep talks and start into growth, then gasp as stems are bitten by crown rot and fall. Surviving stems bear pale and discolored leaves, deprived of nutrients available only in warmer or better-aerated soils. Leaf spot and mildew plague them, especially at high summer.

Burning bushes and yews must be the most tolerant plants of all time, for all the places they’re asked to grow. But watch them to be the first to tell you when it’s too wet, with pale foliage that yellows or develops fall color early. Redtwig dogwood, a native to wet places where soil water is constantly refreshed, is often relegated to stagnant mud where its beautiful foliage assumes a tortured, pocked look.

We must confine plants to be able to grow trees in openings in the sidewalk or perennial gardens in patio containers. That’s all copasetic so long as we understand the unavoidable consequence of limited space: premature aging. Wood ages and dies sooner, herbaceous stems become more crowded more quickly, leaf size diminishes on older limbs and crowns, and diseases multiply as blooms decrease.

So star magnolia and callery pear will perform acceptably where their root space is limited, but to keep them flowering well, prune regularly to stimulate fresh young growth. Mint makes a great container plant, lush and fragrant even on a hot patio, but where one in the garden might need dividing every two or three years, divide the potted one each and every spring.

If I were a plant, I would probably tolerate much in exchange for compliments and the satisfaction of persisting against all odds. Yet I doubt that I could handle confinement with anything approaching grace, for there as here I would always want a little more space!