Archive for the bees tag

In the global debate over neonicotinoid pesticides, the company that makes most of them has relied on one primary argument to defend its product: The evidence that these chemicals, commonly called “neonics,” are harmful to bees has been gathered in artificial conditions, force-feeding bees in the laboratory, rather than in the real world of farm fields. That company, Bayer, states on its website that “no adverse effects to bee colonies were ever observed in field studies at field-realistic exposure conditions.”

Bayer will have a harder time making that argument after today. (Although it still has another argument in its quiver. We’ll get to that later.)

This week, the prestigious journal Science reveals results from the biggest field study ever conducted of bees and neonics, which are usually coated on seeds, like corn and soybean seeds, before planting. Scientists monitored honeybees and two types of wild bees at 33 sites across Europe, in the United Kingdom, Germany and Hungary. At each site, the bees were placed near large fields of canola. Some of the fields contained canola grown from seeds that were treated with neonicotinoid pesticides, along with a standard fungicide. Other fields were planted with canola treated only with fungicides.

END_OF_DOCUMENT_TOKEN_TO_BE_REPLACED

Pollinators are looking for nectar and pollen when foraging in your garden. This is their food, the carbohydrates and protein they need to thrive and produce offspring. Native bees will widely feed on many different types of flowering plants in your landscape and garden.

Think about “serving” up a menu of blooms in early spring through fall. Choose a wide range of flowering plants including annuals, herbaceous perennials and native plants, bulbs, trees and shrubs that are known to support pollinator health. Early blooming plants such as spring bulbs or Pachysandra, or very late bloomers such as Sedum or Anemone are often the most needed food sources for pollinators since there are fewer floral resources available during those times. 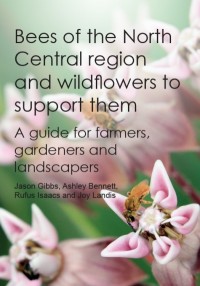 Bees of the Great Lakes Region and Wildflowers to Support Them is a new Michigan State University Extension publication that provides an overview of the diverse community of wild and managed bees across the Great Lakes region. Packed with photos of the most common bee species and showing photographs and descriptions of wildflowers that are attractive to bees, the guide also provides a section on bee conservation with some practical steps to take.

Bees are essential for pollination of many crops and they also pollinate flowers in the garden and in wild areas, helping to support natural systems. Approaches to supporting these insects is generally similar for all habitats: provide them with some food (flowers), give them a place to nest (habitat or artificial cavities) and don’t kill them (use bee-safe insecticides or follow label restrictions to protect pollinators).

A Michigan State University researcher may have found the key to the infiltration and destruction of the nation’s honeybee colonies.

It has to do with the invader’s stink. Specifically, the now-infamous Varroa mite uses a chemical camouflage to match its body odor — or something close to it — to its honeybee host. It even fine-tunes the formula to mimic the subtle differences of smell among bees in individual colonies.

“Honeybees rely a lot of on chemical communications,” said Zachary Huang, an MSU entomologist and lead author on a paper in the academic journal, Biology Letters, explaining the mite’s ability to deceive.

The number of bee colonies that died in the year since April 2014 reached levels only ever seen once before, reported the Bee Informed Partnership.

Of the total number of colonies managed over the past 12 months, U.S. beekeepers said 42.1 percent were lost. It was the second-highest annual loss recorded.

Annual beehive losses varied across the nation, with the highest in Oklahoma at 63.4 percent and the lowest in Hawaii, with 14 percent.

During this past winter season, the Bee Informed Partnership gathered data from 6,128 beekeepers in the United States who managed 398,247 colonies as of October 2014. That represents about 14.5 percent of the estimated 2.74 million managed honey bee colonies in the country.

Winter die-offs were reported to be 18.7 percent, which is quite a bit lower than the nine-year average total loss of 28.7 percent, the partnership noted. But bees don’t just die in the winter; they perish in the summer too.

Read the study at Bee Informed…

We discovered these fascinating macro photographs of bees and other insects by Sam Droege, a biologist with the U.S. Geological Survey (USGS) Bee Monitoring Lab. Friend or foe, all are interesting to look at. Check out his gallery on Flickr.

Two British scientists are dumping cold water on campaigns to promote urban beekeeping. They say that trying to “help the bees” by setting out more hives is naive and misguided if the bees can’t find enough flowers nearby to feed on. You’ll just end up with sick and starving bees.