September, the season of conflict, is upon us.

It’s a time of great opportunity. The nights are cool and fall stretches long ahead. Moving plants, divisions and new plantings will take quickly and have plenty of time to root in before winter.

A season’s planning is done—in mental notes, journal entries, photographic records, and verbal promises, we’ve each made dozens of decisions regarding plants and gardens. That new plant is wonderful, but should be moved. Another has exhausted its grace period and is still lacking—it needs a quick trip to the compost pile. Long-time residents that have begun the downhill slide into decline need renewal or relocation.

There is no time like today to do these things.

Now it’s certain which plants are which and how we feel about each. In the spring we will have forgotten how overbearing the pink phloxes have become in that bed over near the crabapple. Even if we are able to distinguish the pinks from the whites six months from now, we may lack the resolve to oust them.

In late summer, with plant bodies at their fullest, it is clear which must be reduced and by how much to widen a path or allow neighboring plants a fair share of air space. In spring when emptiness is everywhere, the urge is to let the riot come, so long as the voids are filled and filled quickly.

Today, the sight and names of wonderful new plants are fresh in mind, and potted recruits are ready for us at garden centers, often at reduced prices. Planted now, given the fall to settle in and early spring to resume growth, they will be nearly one season larger than counterparts bought and planted next April or May.

Hand-in-hand with opportunity, though, comes mind-numbing, body-slowing reluctance. I’m parked in a chair, stupefied. My plea goes up to the gardening gods: Save me from late summer inertia! Grant me impetus, that I may take advantage of September’s gentle growing conditions.

When that divine nudge comes, I know to have my to-do list ready: 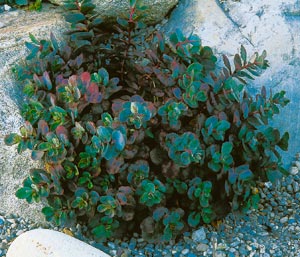 Every year I take aim and clear one area that has fallen to thugs—aggressive plants that spread and crowd out others. Everyone has a few, and I may have more than my share. Although I’d like to eradicate them all at once, I’ve learned that thoroughness in removal is the only sure cure. Since thoroughness takes so much time, I tackle only one thug per season.

This year’s target is spotted bellflower (Campanula punctata). It’s an easy place to start—though an aggressive plant can make up for its bad nature with a pretty face, this one is as homely as it is pesty.

The space left bare of bellflower will be a site for annuals or vegetables next year while I keep my eyes peeled for any bellflower resurgence from overlooked roots. I’ll have all next season to plan perennial replacements, though I already have in mind a combination of big betony (Stachys macrantha), Sedum ‘Vera Jameson’ and Salvia azurea. I have some of each that need rescuing from worn-out ground.

Hydrangeas ‘Nikko Blue’ and ‘All Summer Beauty’ have got to go. Really, this time—no more second chances. For others blessed with sheltered microclimates these plants may be August delight, but here they are flowerless. Their branch tips are killed each winter, and though new ones grow, they lack the programming to generate flowers in that, their first season. Only at the end of a long season will more tips with blooming potential be produced—and winter cold will again nip that process in the bud.

Likewise, my ‘Arnold’s Dwarf’ forsythia belongs in the compost. Dwarf it is, but flowering it is not; its flower buds are too tender to survive any but the mildest winter.

On the subject of dwarf plants, dwarf fothergilla (Fothergilla gardenii) is definitely worth keeping, but it needs a new home in my garden. It leapt to the catalog-promised height of three feet in its first year. After almost three years, it’s clear that endearing growth spurt was not a bonus earned by my gardening skills—the shrub slowed at four feet but didn’t stop until five. Even if it could be pruned without ruining the shape, who has time to prune another shrub in spring right after it blooms? Better to move it to a spot where a five-foot presence is needed.

The fothergilla will take the place of a superfluous purple bush clover (Lespedeza thunbergii), a die-back shrub 5 to 6 feet tall and as wide. I planted two bush clovers, but now see that one plant provides plenty of impact. Of the two I planted, one is variety ‘Gibraltar’ and is definitely the prettier for holding its pinkish-purple pea flowers in denser clusters. I’ll keep ‘Gibraltar’ and a friend will get the other—a treasure even if second to ‘Gibraltar.’ This October where there were two five-foot fountains of pink bloom there will be one fountain and one mass of deep orange fothergilla foliage.

Ah, fall foliage. Have I really decided that the oakleaf hydrangea (Hydrangea quercifolia) will go this year? It never lives up to its potential for bloom or fall color, not in the dry, lean soil and scant shade of my garden. Having seen it in the shade of high-pruned trees in rich, moist, well-drained soil, where each leaf may be nearly 12 inches by 12 inches, I have begun to pity more than enjoy mine. Its foliage is pale and half-sized, the flower clusters and the leaves burnt on the edges in summer, the foliage a washed out brown in fall, far from the rich maroon it could be.

Yes, that hydrangea will go. For that will free up more than a square yard of half-shade space, a perfect relocation site for four great plants now languishing in unsuitable, unseen places: fringe cups, tovara, large-flowered comfrey and toadlily.

Fringe cups (Tellima grandiflora) has been the object of more queries than almost any other plant in the dry, shady garden I designed and help tend at the Detroit Zoo. It has basal foliage like a furry coral bell and tiny flowers, pink-edged, ranged along leafless, wiry stems. Even better than good looks, it has long-term dependability and low maintenance requirements in dry shade.

Tovara (Tovara virginiana or Persicaria virginiana ‘Painter’s Palette’) adds height and colorful leaf to the shade. If I don’t move mine soon from under the encroaching viburnums, it will be only a memory.

Large-flowered comfrey (Symphytum grandiflorum) came into my garden as a groundcover trial. Big leaves, yellow flowers in May on short stalks, a dense, weed-smothering growth habit, and tolerance for drought commended it to me for a spot under the influence of my neighbor’s thirsty elm. It performed well where it was planted, and I promptly began to ignore it. Then a few divisions moved to a client’s garden because they are coarse, low, able to handle shade and are not liked by slugs. In that new site, I came to appreciate it more as a specimen than a groundcover.

When I planted my first toadlily (Tricyrtis hirta), its placement far from the beaten track and behind taller plants was determined solely by available space. Since then I’ve chanced upon that plant only by accident, but I’ve been more impressed each time with its form and the enchanting purple flowers in October. It’s high time it moved to center stage from unseen wings.

Unseen. That describes my dwarf balsam fir (Abies balsamea ‘Nana’). I haven’t seen it since the globe thistle overwhelmed it. That globe thistle definitely has to go. Fine plant though it is, I have its divisions in more suitable places. Far better to let the fir grow.

Now I’m wondering, when did I last see my golden hops (Humulus lupulus ‘Nugget’)? It was on my wish list for at least five years before I found it last spring. You’d think I could remember where I planted it…

I’ll enjoy my September, once I get moving. Accomplishment, mixed with surprise, is a great tonic for September reluctance.