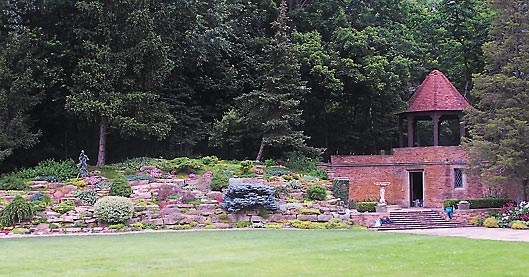 Sandie Parrott
The massive Rock Garden ay Meadow Brook is filled with alpines, perennials, and dwarf conifers. There is tool storage underneath the beautiful gazebo.
The landscape sustainability project at Meadow Brook

Meadow Brook formed a special program in 2009 called the “Landscape Sustainability Project.” Laura Kwaitkowski, a senior at Oakland University, applied for the Summer Student Work Corps position and was chosen to work during the summer.

“It was perfect for me because I love working with nature and plants, and I believe in organic and eco-friendly practices,” said Kwaitkowski. She explained some of the work she did and all the hats she wore: “There was only one job position, so I prepared and took care of the kitchen garden, maintained compost piles with the help of the garden club, cleared a few foot paths in the woods, and did a lot of research on organic and eco-friendly techniques.”

That isn’t all she did. “I grew everything in the kitchen garden organically. I didn’t use any chemical fertilizers. I made a pest spray from garlic, chili peppers, and soapy water (see accompanying recipe), and brewed compost tea to fertilize. I also came up with guidelines for the volunteer groups to maintain the compost piles, including the best temperature to keep them, when to add brown and green material to the piles, and when to turn them.”

Kwaitkowski explains what she garnered from this hands-on project, “I have learned a lot more about composting than I knew before, such as how the process can be sped up so the compost can be returned to the gardens sooner. All spent flower material from the gardens was put into the compost piles, so that was a great way to reduce waste and recycle. I learned more about organic gardening. If I encountered a certain insect or disease, I looked for an organic solution. For example, some of the pepper plants got a black spot fungus after a cool week. I used a mixture of chamomile tea, peppermint oil, and soap to spray on the plants and I picked off the infected leaves. The plants fully recovered. I documented the best ways to compost, how to make compost tea, how to organically fertilize and wrote recipes for the insect and fungal spray. I gained so much knowledge that if I ever encounter similar situations with my own garden, I will know exactly how to handle them!”

Blend all ingredients in a blender. Strain so only liquid remains. Add 3 squirts dish soap and 4 to 5 cups more water. Stir or shake. Put in a squirt bottle, spray on plants. Also deters deer and rabbits. 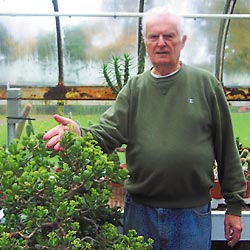 Sandie Parrott
Chuck Floeter, a 20-year Meadow Brook volunteer, shows off Matilda’s jade plant.Chuck Floeter has been a modest, dedicated volunteer for 20 years at the original Meadow Brook greenhouse built around the turn of the 20th century by the well-known company Lord and Burnham. The panes of glass leak, they no longer have the old boiler to heat the structure, but the 18-inch-thick floor (used to collect heat) and the early structure are still intact and used on a daily basis. Typically, you can find Floeter working in the greenhouse on Thursdays or for a special event, like their huge annual plant sale in mid-May. He puts in over 100 volunteer hours every year.

“The duties of the volunteers include starting seeds, repotting, watering, weeding, grooming, selling, and giving tours. We have a volunteer whose specialty is orchids, and another who loves cacti. Mine is starting plants from seeds or cuttings, and giving tours,” explained Floeter.

A tour can be arranged by calling the Greenhouse Manager, Matt Carlson. Make sure to see the gigantic, winter-hardy prickly pear cactus (Opuntia humifusa), especially when it is covered in yellow blooms. Every fall they must trim it severely to allow the top of the greenhouse to close! Be there at the right time to beg for cuttings. The plant is over 90 years old according to Floeter. “When I joined the staff, the cactus in the East Wing had a sign on it stating that it was 70 years old. I am now in my 20th year as a volunteer so that means the cactus has been in the greenhouse at least 90 years. I have found no record, but Matilda Dodge Wilson did have a home in Arizona.” This cactus is hardy in Michigan, but they protect it in winter. This room also contains Matilda’s very large and old Jade plant (Crassula ovata) which is beautiful when it blooms.

The greenhouse was originally used to start vegetable plants for the farm and to house Matilda’s prize collections of plants. In the 1970’s it was used as an educational structure for students. It is now utilized for growing bedding plants for the estate and for the plant sale. They no longer start the plants from seed, but purchase trays of plugs instead. According to Floeter it is easier and more time and cost efficient to use the plugs. They also grow and keep tropical and potted plants for use in Meadow Brook plays and events. 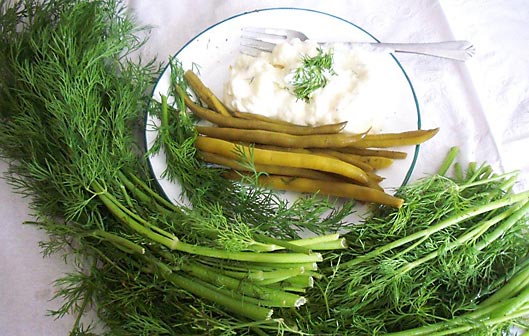 Mince fresh dill weed or sprinkle dried dill weed and a few drops of lemon juice with a softened stick of butter. To be enjoyed on crackers, fresh baked bread, or baked on top of fresh fish.