“Nursery operators, landscapers and homeowners should never accept hemlock from quarantined areas, and never accept hemlock without proper certification,” said Ken Rauscher, MDA Pesticide and Plant Pest Management Division Director.  “Examine your hemlock for the presence white, cottony masses on the underside of the branches where the needles attach.  If you suspect HWA, contact MDA immediately.”

The positive sites in Macomb and Ottawa counties were discovered by two alert arborists who reported their suspicions to MDA.

“These detections underscore the importance of citizen involvement in exotic pest detection,” said Rauscher. “Without these alert and conscientious individuals, these detections may have gone unnoticed for months, or even years, making eradication of this devastating pest much more unlikely.”

These infestations represent the first detections of HWA in Michigan since 2006, when it was found in hemlock nursery stock grown in West Virginia and planted for residential landscaping in the Harbor Springs area. This population was eradicated, and the area was subjected to several years of intensive pesticide treatments and surveys.

The new infestations are also believed to originate from hemlock nursery stock originating from HWA-infested areas of the U.S.  The infested trees at each site have been removed and destroyed. Nearby trees are being treated with pesticides and surveys are being performed to determine if HWA has spread.

“MDA is requiring removal of positive trees and treatment with an approved insecticide and will also conduct survey activities where HWA has been confirmed,” said Rauscher. “Homeowners should be on the look out for white cottony masses at the base of the needles and report any suspects to MDA.”

HWA is a small, aphid-like insect that uses its long, siphoning mouthparts to extract sap from hemlock trees. Native to eastern Asia, HWA was discovered in Virginia in 1951, and has since spread over an area from Georgia to Maine, decimating hemlock stands across much of the eastern U.S.

Over 100 million hemlock trees are present in Michigan forests, providing valuable habitat for a diversity of animals, including birds, deer, and fish. These trees are critical to the ecology and aesthetics of Michigan’s northern forests. 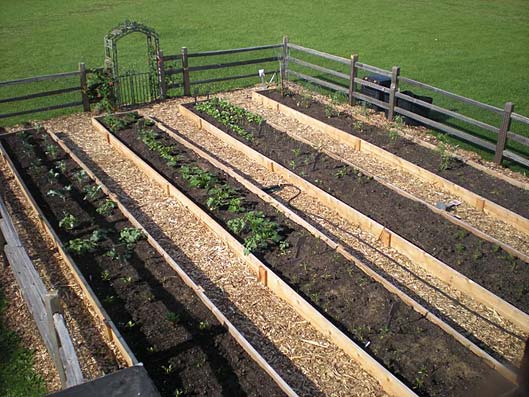 Congratulations to the many volunteers that worked in the garden to contribute to this bountiful harvest.

The majesty of winter’s quiet beauty is a breathtaking backdrop for discovering birds on a crisp morning at Edsel & Eleanor Ford House. Birders have seen and heard the beautiful notes of songbirds and witnessed migration overhead.

Ford House and Rosann Kovalcik, owner of Wild Bird’s Unlimited in Grosse Pointe Woods, continue their partnership by offering novice and experienced bird watchers the opportunity to walk among the magnificent grounds during the Winter/Spring Bird Walk series at Ford House. Over the years, participants in walks have discovered more than 190 species of birds.

Reservations are required and may be made by calling 313.884.4222. Admission to the bird walk is $7 per person. For additional information, visit www.fordhouse.org.

This is the time of year to start thinking about what to grow in your vegetable garden this summer. If you’re considering spinach, this informative piece from the National Garden Bureau is a must-read.

Forget Popeye! Spinach contains many more nutrients than just iron. Actually, the amount of iron in spinach comes way down the list after vitamins A and C, thiamin, potassium and folic acid (one of the B complex vitamins). Dark green leafy vegetables, like spinach, contain lutein and zeaxanthin, both carotenoids. Studies show carotenoids help your eyes stay healthy as you age by preventing macular degeneration and the formation of cataracts. Vitamins A and C, both antioxidants, keep your cardiovascular system healthy, thereby reducing the risk of strokes and heart attacks. Folic acid is essential for the production of red blood cells and for normal growth, and may reduce the risk of certain cancers. It’s particularly important for pregnant women. 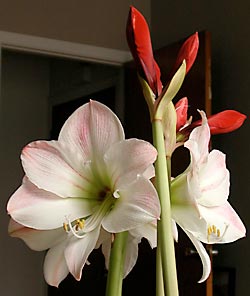 Flickr / Steve Drolet
An apple blossom amaryllis in bloom.There is no better way to brighten your home during winter than growing some bulbs indoors. Here’s a good story from nj.com to get you started:

After the Christmas tree comes down and the wreaths are tossed, a long spell of bleak days looms ahead with nary a hint of green in sight. Fill the void with winter’s brightest bulbs and you won’t have to pine for vibrant, living color.

The key species for winter bloom are two showy flowers: amaryllis and paperwhites narcissus. Both are easy-to-grow windowsill plants offering quick, if not instant, gratification. Delicate paperwhites can bloom in as little as four weeks and gaudy amaryllis in six.

Unlike familiar spring-flowering bulbs, including tulips, daffodils and hyacinths, these two species don’t require a long period of cold temperatures to trigger bloom. Native to regions of the Southern Hemisphere, they are programmed to flower on an upside-down schedule in our winter months.

Read the rest of the story about indoor bulbs at NJ.com

Interesting story from mlive.com about two enterprising Flint gardeners that are doing their part for job creation and urban renewal with their commercial startup:

Urban gardening projects have been sprouting all over the city, but one new project may be the city’s most visible, even before a single seed has been planted.

A massive hoop house — a kind of greenhouse that uses a plastic covering to hold in heat from the sun — now stands covered in Christmas lights on a plot of land off Court Street just west of Miller Road.

Organic is still a hot topic these days but organic seeds are not always easy to find in stores. Seeds of Change, the oldest and largest organic seed company in the U.S. has just released their 2011 catalog. Included are many new introductions including Blush tomato, Torreto Romaine lettuce and Tirreno Italian melon. Find out more on their website.

We came across a fun quiz in The Washington Post that tests your gardening skills. For example:

When is the best time to plant roses?

a) Install in deep, wide holes as bare root plants in November.

b) In spring, when growth begins.

c) In fall when temperatures are still mild.

Any seasoned vegetable gardener knows the pros and cons of growing one’s own vegetables. Cost isn’t usually one of the cons we list, but most would admit that the costs can add up – and quickly. With that in mind, this Reuters story has some good tips on what is most economical to grow in your garden.

Vegetable gardening may not be as frugal a strategy as you think it is. Just ask William Alexander, a man who wrote The $64 Tomato (Algonquin Books, 2007) after going overboard on his own garden. He did the math, and calculated that it cost that much per tomato by the time he was done “investing” in soil additives, plants, water, tomato cages, raised beds and more.

But that doesn’t stop most of us. The slow economy has prompted more people to garden than have in many years. So what if they pay for the privilege? You could argue that it is a fun and healthy hobby and “saving” money is only an afterthought. Maybe so, but it’s nice to save money in the garden, too. Here’s how.

In the season of gift giving, here is an interesting take from CNN on home-grown gift ideas.

Some Americans are giving homegrown food and specialty items as presents this holiday season and spending a fraction of what they’d pay in a store.

According to the National Gardening Association, about 41 million households participate in food gardening; 58 percent do it to grow better tasting food and 54 percent do it to save money on food bills.