One gardener discovers that a favorite low-mess tree in his yard is a type that has a reputation as a slob. Another plants a tree touted for neatness and finds it to be an unqualified mess. What gives?

In both cases, the “right plant, right place” axiom is probably involved. Put a plant into a site where it can grow with gusto and it may be healthy enough to rise above its bad rep. Condemn even the neatest species or variety to a site where it does not receive the amount of light it needs, gets too much or too little water, has insufficient root space, or is saddled with other handicaps, and you may indeed find yourself with a mess on your hands. 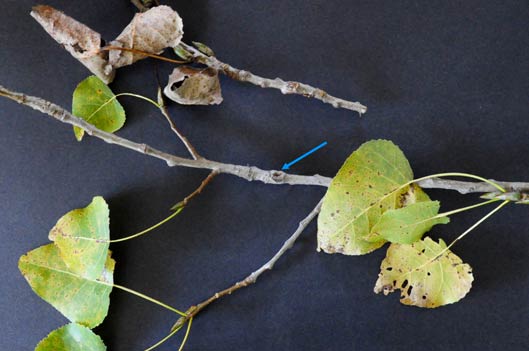 Steven Nikkila
Poplars and cottonwoods (species and hybrids in the genus Populus) grow fast, rustle cheerily in a breeze and tolerate tough conditions such as alternately wet and dry soil. Alas, they make the messy tree list on account of their seeds—which can coat the landscape with “snow” in a fruitful year—plus their tendency to shed twigs and branches that snap where weakened by fungal cankers (arrow) and boring insects. Hybrid poplars are slowly changing that reputation. Varieties are available that are seedless and resistant to the tree’s worst pests. Look for varieties that are described as sterile and pest resistant, such as ‘Noreaster,’ ‘Manitou,’ ‘Siouxland,’ and ‘Prairie Sky.’

Is seedlessness worth it? The nose may know!

Some trees that do not produce fruit or seeds are naturally sterile clones. The barrier to fruit formation may be genetic. Alternately, it may be the result of flowerlessness (golden thornless honeylocust is an example) or the inability of pollinators to work the flowers (double-flowered ornamental cherries such as ‘Kwanzan’). It’s a good idea to check the facts before you decide a sterile clone is right for you. You wouldn’t want to count on a plant for its flower color only to realize years after planting that it’s sterile by virtue of flowerlessness.

Other seedless plants are varieties from “dioecious” species—those that have separate male and female plants. In the species Ginkgo biloba, for instance, some individuals bear only flowers with fruit-producing parts. We call these females. Other individuals produce only pollen-bearing flowers. Ginkgo ‘Windover Gold’ is one of these “male” ginkgos. Ash (Fraxinus), cottonwood (Populus), box elder (Acer negundo), cork tree (Phellodendron), and mulberry (Morus) are other dioecious species found in the landscape.

If a tree you plant is sterile because it is a male plant, it is certain to up the pollen count in your area. All of the trees listed above are also wind-pollinated, meaning the pollen they produce is lightweight and airborne, rather than heavy and sticky for transport by insects. Wind-borne pollen is a potential allergen. The planting of large numbers of male trees has been cited as a factor in the increased pollen count in some cities.

Steven Nikkila
A ginkgo tree has lots of neat tendencies, including tiny, blow-away flower parts, strong wood resistant to breakage, pest resistance that makes it unlikely to lose twigs or foliage mid-season, and leaves that fall all together over a few days in autumn so it’s practical to rake up after such a tree in just one outing. Yet we can’t put the tree into the “neat” category unless we qualify it as male ginkgo. Female ginkgo trees begin to bear at 15 to 20 years and then every fall may produce prolific crops of apricot-sized fruits (pictured) that smell like dog excrement. 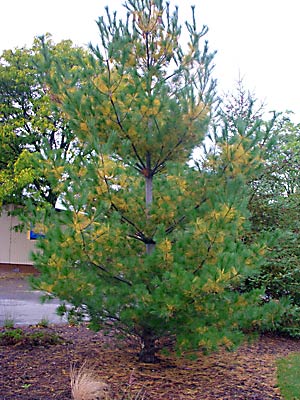 Steven Nikkila
Evergreens do lose old foliage. Some species lose old needles dramatically, all at once over a few weeks each fall. When a person suddenly notices their pine shedding, it can be alarming—but it’s natural and the once-a-year clean-up may be better for some gardeners than continual sweeping under a spruce, juniper, or yew.Evergreen species do shed leaves and needles. We consider pine, spruce, yew, juniper, rhododendron, boxwood, and others to be evergreen because they rarely shed all their foliage at once.

Some evergreens shed their oldest foliage once a year—arborvitae and pine are notable examples. Those who suddenly take notice of the fall needle drop may even be alarmed. Others such as spruce, yew, and boxwood shed continually. If you are looking for an evergreen that will overhang a walkway you wish to be clear of debris, it may be better to select a species that sheds once a year, for limited clean up.