Archive for the moon tag

Arranging your gardening according to the phases of the moon

Lunacy. Spoken of a person, it means mental derangement and irrational actions. Use it in relation to plants and it means scheduling farm or garden chores according to an orderly celestial pattern.

Two very different definitions. Or are they?

Lunacy is a traditional method of synchronizing one’s sowing, tending and reaping with the predictable phases of the moon and luna’s position relative to the constellations of the zodiac. A lunatic will plant perennials in the week following a full moon because he or she is assured by lunatic tradition that those plants will prosper better than perennials planted during the second week after a full moon.

If that follower of the moon has either a thoroughly practical background in sky-watching or an almanac which lists the moon’s phase and position in the zodiac for each day of the year, he or she may also decide to plant only on the third and fourth days of that week. That would happen because the moon was “in” the constellation Scorpio during those dates. Lunatics maintain that the moon in such a position exerts a prime and positive influence on plants.

Sound confusing? I looked deep into lunacy this winter. I came away skeptical but still interested, enough so to offer my findings to you. I outline the basic principles of lunacy and specifics for this spring’s garden chores in the chart on page 34. 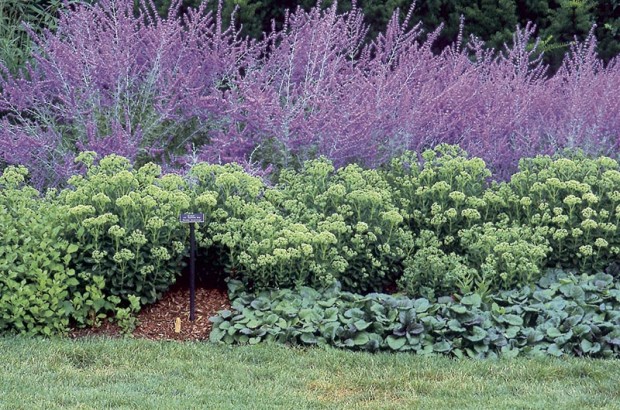 I have viewed lunacy as I do the predicting of ocean tides for 3 reasons.

First, tidal predictions and planting calendars were both so important to early man that natural events were scrutinized and religiously recorded for countless generations to improve the accuracy of those forecasts.

Second, predicting both lunar and tidal events requires specialized calculations of a type legible only to those who have passed a course or two in higher math and astronomy. As one not initiated to those ways, I’ve closeted both issues in a mental nook labeled “Tides and Lunacy: information occasionally needed; obtain current schedule from almanac.”

Finally, and probably most importantly, the moon figures prominently in each of these disciplines yet in neither case can I describe the connection without making it sound like magic is involved. I first have to ask that the reader accept gravitational theory, that the moon is responsible for the sloshing of water back and forth across Earth’s ocean basins. I would present this as a scientific fact even though I can offer no simple proofs and so it may feel to you as it does to me—like an item of faith. Having done that, how can I fail to be equally serious about lunar influence on herbaceous plant cells? After all, they’re 95 percent water and quite pliable. The moon’s effect on these tiny watery bodies may lack the scientific proofs of tidal study, but it seems equally plausible to me.

Thus I think there must be something to lunacy, even if it is scientifically “soft” where tide prediction is “hard.”

I’ve found the two to be drastically different in practical application, however. I have recalled and used my “Tides and Lunacy” notes now and then, about as many times regarding tides as lunacy. Yet where checking on tides yielded a clear result, my attempts to employ the moon to better my garden were not so conclusive.

For instance, I checked an almanac when we planned to visit an Atlantic beach with water-loving, but wave-shy toddlers. Without question and just as foretold in the chart, it was low tide when we arrived. Yet I was unsure of the result when I planted according to lunar lore for a faster, better yield from peas. The seedlings seemed to appear quickly and the plants to be very productive, but I couldn’t be sure of either, lacking differently-timed peas as a comparison.

I keep looking for science in lunacy, though. First I read a no-till farming association’s report that fewer weeds sprouted in test fields cultivated at night than fields tilled by day. Then I wonder if this might be once-removed proof of the lunatic prediction that a bed weeded in the week before new moon (the dark of the moon) would stay weed-free longer than if weeded at another time. In night tilling, seeds receive dim moonlight rather than bright sunshine. Weeding on a date when there will be no moon means less total light reaches the seeds during their first 24 hours than if the moon did shine. So, both the no-till tests and the lunatic procedure involve less total light reaching weed seeds early on. If that first 12 or 24 hours is critical to weed development and if seeds can be shown to accumulate light-hours in the same way growing plants do, there might be something here.

Despite the nebulous connection between lunatic lore and results, serious lunatics have failed to conduct credible scientific studies that might cement the two. Believers seem to prefer to keep building upon that base as if it was rock steady.

It might be understandable that this happened in the past. Then, priests and priestesses schooled in reading the sky and naming dates advised their flocks when to plant or harvest. In return for this basic, good information, the soothsayers received food, clothing and homage from a community. Perhaps succeeding generations of farmers, having memorized all the basic lessons such as “plant in May, not March,” began to request more in return for their support of the learned few. Maybe priests and priestesses truly observed such advanced lunacy, such as flowers planted in Libra and asparagus set out in Taurus growing better than the same crops started at other times, and passed this along. Or maybe some individuals fabricated some of this advice just to “sweeten the pot,” knowing the facts wouldn’t be tested by the simple folk who received that “added value.”

This second situation could explain some of the discrepancies of modern lunacy, such as “plant all perennial crops in the 3rd quarter” and “plant annual crops with seed outside the fruit such as asparagus in the first quarter.” Asparagus is a perennial. That’s undeniable. That it was assigned to a group of plants with “seed outside the fruit”—a vague concept never fully explained in lunatic tomes—may have been the work of a clergyperson desperate to be kept on!

Significantly, those who promote lunacy today—most notably, the publishers of lunacy books and farming almanacs—have not seen fit to invest any of the coin we’ve offered up to them to conduct even rudimentary scientific tests. Instead, the books and almanacs admonish us to “conduct tests and let us know what you find.”

So here I remain, on the fence but still leaning toward the moon. I want to believe that those seeds which popped up in half the predicted time were pulled by the waxing moon and that I will see the same result again if my garden ever depends on it. Yet I don’t have enough need for quicker, better crops to justify spending the time combing the almanacs, determining the best dates for this or that, and making tests.

I hope you have fun this year in your new view of the moon. And who knows? Maybe some loony thing you do will net you the tastiest tomato or huskiest hollyhock ever!

While catching up on some recent stories, this one caught our eye:

Gardens on the moon. It sounds like a particularly whimsical children’s book. But if NASA has its way, it might become more than a fantasy story. The space agency revealed plans this past week to grow a series of plants on the moon: basil, turnips and a little white flowered planet called Arabidopsis.

Read or listen to the full story on NPR.org…