Home Tree Tips Are your trees making the grade? A proper grade is crucial to tree health

Let’s discuss a leading cause of premature death and decline of many of our landscape trees. It’s not an insect or a disease although it can make them more prone to both. It is easily prevented and in many cases can be corrected. It can kill some trees relatively quickly and others over decades. What is it? Improper grade around the tree.

I’m not talking about the root ball and if it is above ground or not. What I am concerned about is where the root flare is in relation to the soil grade. Can you see the roots as they enter the soil? Can you even see the taper of the trunk? Some trees look like sticks or telephone poles coming out of the soil with absolutely no visible flare at all. These are sure indicators that the plant is too deep, has girdling roots, or both. Think about trees growing in the forest, and how they appear to be “standing” on the soil as opposed to being buried in it. You can easily see the root flare and often the roots themselves as they enter the soil.

Now look at your trees – do you see any resemblance? Unfortunately many of you will not. That is because for years people were told to plant trees deep to create a deeper root system to “help keep the tree from blowing over” or to “keep the roots out of the lawn.” Both reasons seem logical and have their short-term benefits, but in the long run they will decrease the life of the tree.

Another factor is grade change around trees during development. Fill dirt is often spread to even out the grade of the land, and mature trees can be buried beyond their natural root collars. This can affect both naturally-grown trees and those we have planted, but it will not always affect both of them in the same way. Soil structure also plays a role in the time in which a problem will occur. Heavy clay soils will speed up the process while sandy soils can take years to have an impact.

When a tree has soil placed on it above its root collar, usually one of three things will occur. First, the tree will send out new roots from its buried trunk. If the soil is sandy, they will normally grow away from the trunk, but if the soil is clay, odds are the roots will turn and circle the tree (this is what we call a girdling root). As the tree grows these roots will eventually end up pressed against the trunk, restricting the flow of water and nutrients up to the tree as well as the reverse flow of sugars down to the roots for storage and root growth. 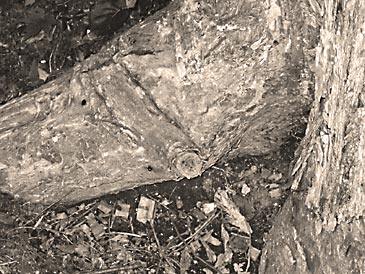 This girdling root has been cut to relive pressure against the tree trunk and allow better movement of water and nutrients up the tree.

The second problem occurs when the soil around the tree is so compacted that it will not let the tree expand, and starts to restrict it. This can happen when new trees are planted too deep in compacted clay soils. Or it can happen to older, mature trees that were filled around long ago. After decades of the tree growing and pushing the soil back, it has caused the soil to compact around it so densely, it’s almost like cement pressed against the trunk. I recently worked on a large white oak that had 10 to 12 inches of sand filled around it in the 1920’s when the house was built. When I removed the soil around the trunk, the sand was so compressed it came out in chunks that looked like sandstone. It was amazing to see how compacted it had become after 80 years of pressure.

The third thing that can occur usually affects young trees and trees with thin bark like linden, beech, cherry, birch, and mountain ash. They develop cankers along their trunks that can lead to decay in the future or kill so much of the cambium that the tree declines. Trees release gasses through their bark and if it is covered by soil, it can disrupt this process and cause a build up of toxins under the bark, which can lead to cankers.

From the nursery to the landscape

I have seen trees of all types and ages that are too deep, but a large majority seem to be trees planted in the 1970’s and later. Even trees planted above grade can be affected if the soil is mounded too far up the trunk. I think a lot of this has to do with how many times the tree is handled before it is planted. Once a tree is dug from a field it gets balled in burlap and it is difficult to see the original grade at which it grew. Next, it will be buried in mulch until shipped to the nursery, and once it gets there it is reburied in mulch until someone buys it. Each time it is handled it has more mulch piled up against it until the original grade is lost on the top of the ball over time. When the homeowner or landscaper plants the tree they look at the new grade of the tree instead of pulling back all the mulch and built up soil that has accumulated and untying the ball to check the original grade. So the tree is sometimes 6 to 10 inches too deep right from the start. More soil is often added around it or the tree can also sink in the hole, making the problem even worse. Finally, if the tree has mulch piled against the trunk, it will only add to the problem as the mulch breaks down and adds more soil above the original grade. So no longer can we just measure the root ball and dig a hole, time should be taken to uncover the trunk and search for the first lateral roots before the hole is dug.

I know many of you are thinking “my trees look like they could be planted too deep but are doing just fine, so what’s the big deal?” Trees are very resilient and can take years to show the effects of past damage. Rarely is the original problem associated with the decline because so much time has passed until the symptoms become apparent years and years later. What you do to your tree today will not show up for years to come, but it will have an impact on its longevity. 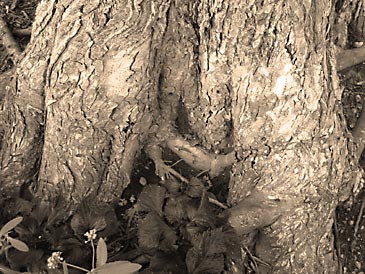 The soil grade has gradually been lowered around this tree, so that the tree’s root flares are now visible.Things that can be done

If you think your tree might be planted too deep and has been in the ground too long to replant, there are some things that can be done to restore the grade. An arborist’s tool called the Air-Spade uses a high pressure stream of air to remove soil around the base of the tree and inspect the roots and trunk below grade. Although powerful, it is still very gentle around trees. It will remove even the most compacted soil but will not disturb the roots; even the small feeder roots will remain intact. Once the soil is removed we can get a better idea of what is going on below grade. If the root system is a tangled mess or the tree has grown into the wire basket, or even has started to decay from old cankers, at least you will know for sure what the problem is instead of simply making guesses.

I recently uncovered the roots of a dogwood that had been declining for several years. Several companies had tried different treatments with no success. When I looked at the roots, it was clear why the tree was not responding – they looked like a tangled ball of knots and the tree was about a foot too deep. Unfortunately, there was little hope to correct this tree, but at least the homeowner now knew why and could avoid wasting any more money on it, while focusing their attention on what to replace it with.

Many trees will improve by just lowering the grade and installing a well around them if necessary to keep the soil away from their trunks. Some trees may have a couple of girdling roots crossing their trunks and they can usually be removed without causing too much stress on the tree.

Steve Turner is a Certified Arborist from Arboricultural Services in Oakland County, Michigan.